No names have been mentioned, but it’s fairly safe to assume this is Mark and Roger. I really have no idea how to feel about this.

The accident occurred at 10:53 a.m. on a gravel road in Washington County maintained by the Oregon Department of Forestry.

The victims were the first to drive the course and had apparently gone about nine-tenths of a mile when they lost control and struck a tree, sheriff’s deputies said. The car went airborne and settled in a ditch on the other side of the road.

The speed of the vehicle on impact could have ranged from 80 to 130 mph but investigators had not determined the exact speed.

Both victims were from England and were members of the pro-rally circuit. They were wearing helmets and all standard safety gear, deputies said.

The identities of the victims were not released pending notification of their families.

Much like certain aircraft, rally cars carry black boxes, which record engine information. Investigators recovered the vehicle’s black box and were examining it.

Members of the Oregon State Police and the Washington County Interagency Crash Analysis and Reconstruction Team were assisting in the investigation.

There have been unconfirmed reports that Subaru driver Mark Lovell and co-driver Roger Freeman was involved in a fatal accident during stage one of the Oregon Trail ProRally. I usually leave the motorsports postings to Trunkmonkey.com but, if this is true, it will effect me greatly. This will be the second fatal accident in less than two months involving drivers that I know personally. I’m trying to hold myself together until SCCA confirms the rumors that have been floating around.

Corbeau has released the FX1 line of fiberglass composite race seats as an inexpensive alternative to the more expensive Sparco Evo. While the FX1 is designed for medium sized drivers and is similar in dimensions to the Sparco Evo 2, the FX1 Wide is claimed to be the largest race seat in production with dimensions slightly larger than the Sparco Evo 3.

Many thanks go out to Brett Setliff over at SOLORACER.com for doing the research on these seats before they were released and drop shipping them to Hatch Manufacturing, our cage builder, for installation into our Subaru Impreza rally car the minute they became available! We are quite impressed with the FX1 Wide but, as with any other inexpensive product, we have found a few quirks.

First of all, the FX1 Wide seats are absolutely huge! Both my navigator and I had major concerns about finding proper seating due to our 44″ waists and birthing hips. We both had issues just barely squeezing into the Corbeau Forza and the Sparco Evo 2 so we knew we needed to find larger seats. We initially looked at the Corbeau Forza II but decided to wait for the FX1 to be released. We knew we’d chosen the right seats when Brent Hatch of Hatch Manufacturing called us and voiced concerns about physically fitting the seats into the cage!

At first glance, the FX1 Wide appeared to be just as good as the Sparco Evo 3. The fiberglass composite shell is extremely sturdy and slightly flexible with high quality outer fabric and padding. Major friction points are reinforced with leather patches and the colored padding can be removed for washing. As a bonus, additional colored inserts and padding can be installed for a better fit.

As with virtually all products, the old adage of you get what you pay for certainly rings true. At $299 and $344 respectively, the FX1 and FX1 Wide can hardly be called cheap. Compared to the more expensive $549 and $599 Evo 2 and Evo 3 seats as well as the $819 Corbeau Pro Sport, however, one has to imagine that the price difference is justifiable. Fortunately, the inexpensive price of the FX1 seems to be due to Corbeau designing the seat on a budget and not cutting corners.

Since the FX1 is a first generation seat and we are some of the first guys in the US to take delivery we fully expected there to be some issues. Most of the issues were quite minor:

Actually fitting the FX1 Wide into a car becomes a game of inserting a square peg into a round hole. Stuffing the FX1 Wide into the GC8 Subaru Impreza chassis required liberal use of a sledgehammer to dent in the transmission tunnel just behind the shifter. Taller drivers who use the seat farther back on the slider may not have a rubbing issue but the fit is still extremely tight. The Corbeau driver seat bracket fit perfectly on the first try and there was plenty of clearance to use both the stock bolts and the eyebolts included with our Sparco six point harnesses to attach the bracket to the chassis.

Since a custom bracket was fabricated to mount the navigator seat as close to the floor and as far back as possible, installation of the harness eyebolts became an issue of chicken and egg. The eyebolt could not be torqued to attach the bracket to the chassis while the seat was on the bracket but, once the bracket was torqued to the chassis, there was not enough clearance to reattach the seat to the bracket. Creative use of physics and folding of the time space continuum, however, allowed everything to be attached properly. We’re still not 100% positive how we got it to work.

It takes some getting used to the new seating position of the FX1 Wide on the Corbeau brackets. Because the base of the FX1 Wide is thinner with less padding than the stock seats the overall seating position is just over two inches lower than stock. This drastically lowers the center of gravity but completely changes the dynamics of driving the car. Adjusting the steering wheel all the way down with the stock seats just barely touched my thighs where I now have over two inches of clearance with the FX1 Wide. Shorter drivers may have an issue with the steering wheel position being too high even in its lowest setting.

Although the padding is much thinner and not as contoured as the Sparco Evo 3 the seats are extremely comfortable, even in a daily driver. Both my navigator and I feel quite at home in the FX1 Wide and I personally have had no comfort issues during both two hour drives and my 30 mile commute to and from work. My navigator has complained of minor discomfort during spirited driving but that can easily be rectified with padded inserts.

Installing the Corbeau FX1 into the Nissan NX2000.

I installed the Corbeau FX1 in my 1993 Nissan NX2000 with the seat rails supplied by Corbeau. Installation couldn’t have been easier: 1 Philips head screw to take out some trim and four 14mm bolts to get the stock seat out. The FX1 went in just as easily. The Corbeau rails matched up perfectly and, four bolts later, the seat was in! The whole install took no more than 15 minutes.

The seat is very firm, even for a race seat, but all padding is removable and upgradeable. The seating angle is ideal and the shoulder bolstering is perfect. The seat by itself rocks.

Unlike the lower seat rails for the GC8 Subaru Impreza, the seat sits quite a bit higher than stock with the Corbeau sliders for the NX2000. At 6’1″ I have to slouch down if I don’t want my head to hit the sunroof so there is definitely no helmet clearance and, with a harness, I’ll never sit in the seat correctly with the supplied Corbeau seat rails. All this is easily fixed by a using different mounting scheme or fabricating custom brackets by hacking up the stock sliders.
According to Brett Setliff at SOLORACER.com Corbeau also makes sport rails to lower the seating position.

Trunkmonkey Racing is now syndicating news from SpecialStage.com! An RSS feed is available of the ten latest news items. For technical information on the RSS news feed that was created, please see Syndic8. 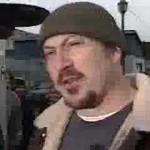 PORTLAND – If you’ve ever been the victim of road rage on Portland’s freeways you might be able to relate to a new commercial being shot in Portland.

“Jonah” a monkey actor takes the stage in a trunk of a car. In the scenes being shot in Portland he is otherwise known as the Trunk Monkey.

In the commercial, when the driver of the car is victimized by “road rage” the monkey pops the trunk and hops out and starts shaking a crowbar at the offending driver.

The Suburban Auto Group is producing the commercial, which obviously is intended to be a tongue-in-check representation of road rage.

Haverhill, MA – After bringing home a second place season finish in the 4WD snow tire class of the Boston BMWCCA ice racing series, Trunkmonkey Racing has acquired an MY96 Subaru Impreza L 2.2 in preparation for entry into Production GT. Sean Sosik-Hamor has stepped up to the plate as team owner and driver and has chosen Andrew Hobgood as co-driver. Vehicle preparation has started and will continue throughout the Summer.

When asked to comment on being chosen as co-driver for Trunkmonkey Racing, Andrew replied, “sweet, and by sweet, I mean cool.”

Sean has been autocrossing and rallycrossing for the past three seasons and has just now acquired the funding to enter into the ClubRally circuit. A schedule has been set to have the car mildly prepared for Production GT by Fall for entry into rallycross and rallysprint events sponsored by Team O’Neil and WDCR as well as the 2003 Boston BMWCCA ice racing series. The car should then be fully prepared by Spring for entry into ClubRally events.

The goal of Trunkmonkey Racing for the first ClubRally season is to simply gain seat time and finish DLBF. Sponsorships have not yet been announced.

Team updates and journal can be found at http://www.trunkmonkeyracing.com/.